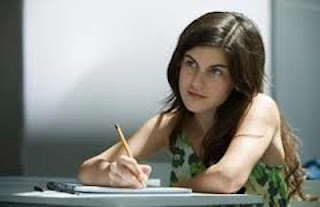 Participating in life is difficult, especially when you have to write a college thesis (they're so long!). That's why I've chosen to help students tackle one of the toughest parts of the writing process: the title.

Usually, when you are writing your thesis, you have "Senior-itis," and you just plain don't give a shit about school, or grades, or your future in general. We can all agree on that last part, especially: the future. Big whoop! Who cares about the future? It's not like the future is more important just because you have more of it ahead of you. Actually, according to internal research I have conducted inside of my own brain off the top of my head just now, the future should be the last thing on your mind during your senior year of college.

That is why I have composed the following list of 10 insulting college thesis titles. Having a punchy, abusive heading can really help your paper stand out and establish your legacy as a maniac who experienced a meltdown and blew it bigtime. Check it out!

1. I Will Take a Crap on Your Head
This title delivers a stern, yet predictably empty threat to your professor, letting him know that you at least feel as though a considerably large piece of your own personal crap should be deposited on his head as soon as humanly possible.

2. Eat Beef, then Barf Beef, Buddy
Besides the playful alliteration, this clever injunction has the tendency to befuddle the professor and pique her curiosity. Good lord, what am I about to read? she might think to herself.

3. Your Class Taught Me to Hate You
This one is nice because it blames your own hatred of your professor entirely on the professor himself, possibly resulting in a temporary feeling of sadness on his part.

5. I'm Giving You the Finger, Always
A feeling of always and forever can really drive home your point, which is that you will be flipping your professor the bird, however metaphorical, in perpetuity.

6. You Smell
Juvenile and brief, a solid "You Smell" can spice up your thesis and make your professor think, Hey, maybe I do smell, or maybe not. Probably not, though. Either way, this student will be getting an F.

7. Nice One
Sometimes general sarcasm is the best kind of sarcasm. Are you saying that your paper is, in fact, not a nice one, because you simply don't care? Are you telling your professor that her assignment was a lame attempt to get you to learn? When you are vague in your sarcastic insult title, you make it more powerful than you ever imagined.

8. You Gotta Be Kidding Me
It's just that he's got to be fuckin' kidding you, all up in the learning environment.

9. Cut the Shit
Here, you're just simply asking her to cut the crap, like she's coming at you with a whole load of bull-crap, and you want her to quit it, because you're fed up, and you've had just about enough of her nonsense.

10. Who Cares
Exactly. Who cares, indeed? You certainly don't. And that is why you have written a college thesis entitled, Who Cares.

Posted by Will Garré at 6:50 PM No comments: