Posted by Will Garré at 1:40 AM No comments:

I didn't read Moby-Dick at all today.  I am such a blobmaestro.

Man.  My dog is looking at me straight in the face right now.  He has a tawny pelt, like a she-lion.  His coat of butterscotch fur shines like a Werther's Original and smells like nachos.  I caress him on a regular basis.  Uhp, now he's barfing up yellow spume on the floor.

So King Solomon's Mines is a great book.  It's slightly racist, at times, but not too shabby, nevertheless.  It's actually really progressive for a book written in the late nineteenth century by a white guy.  It's considered a "romance," in that it is about some heroes going on an adventure quest in a foreign land.  There is some actual kissy, smoochy romance in it too, for example, the interracial love affair that develops between Captain Good and Foulata.

They say that H. Rider Haggard wrote this book in about four months, after making a bet with his brother that he could write a better adventure story than Robert Louis Stevenson's Treasure Island.  I can't tell whether or not he succeeded.  Great book, though.  Lots of exciting battle scenes and funny turns of phrase.

If I wrote a book in four months, it would probably be way worse than King Solomon's Mines.  I know what it would be about, though.  It would be about a bike messenger who gets his thighs smushed by a dump truck, rendering him incapable of thrashing the streets.  It would be called, Because of the Squishing Force of that Truck, My Legs Are Like Those of a Ragdoll.

Posted by Will Garré at 9:46 PM No comments: 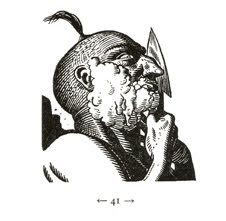 Oh man. My computer is really old, so I can't update my "plug-ins" for the browser, and writing these blog posts has turned into a mental chess match between me and my Powerbook G4. I'm not even good at chess with humans. I'm good at Stratego, though. I'd be able to vanquish any computer in a mental Stratego match, including the computer inside KITT from Knight Rider.

I've recently begun reading Moby-Dick. It is my summertime tome. My goal is to write updates on my Moby-Dick experience in my blog, here. It's a good book. Did you know that Herman Melville was from New York City? He was born there in 1819. He mentions some nice local NYC places, like Rockaway beach. I've been to Rockaway beach numerous times. The waves are tremendous. Did you know that, during his time in Massachusetts, Melville's next door neighbor was Nathaniel Hawthorne? Not too shabby.

I'm about 70 pages into the book. The best character so far is Queequeg. That guy rules. He is from a small island near New Zealand, and he is covered in tribal tattoos, and he carries shrunken heads around and shaves his face with his harpoon. Also, he has teeth that have been filed to points, like the clown from Stephen King's IT. Ishmael shows up to a broken down inn in New Bedford, MA, and is forced to share a bed with Queequeg, and he is afeared of him. In the morning, Ishmael wakes up and notices that Queequeg's arm is around him, and they're spooning. Within 24 hours they are super best pals and delight in platonic snuggling and pillow talk. Queequeg promises to be Ishmael's best buddy for life and always to protect him. It is a beautiful pagan-Christian bro-mance.

Then they're on a schooner to Nantucket, and some guy mocks Queequeg, and Queequeg throws him in the air--not hurting him, just scaring him. Then, a few minutes later, when that same guy gets knocked overboard by the boom, Queequeg magnanimously saves him from drowning. You simply can't go wrong with Queequeg. Great guy. I hope Melville doesn't kill him off too quickly.

This book rules.
Posted by Will Garré at 1:40 PM No comments:

The Mayor of Casterbridge. Good book. I like it. Thomas Hardy. Good author.

I read this book a couple of months ago, and I've always wanted to discuss it here in my blog. The Mayor of Casterbridge is essentially a book about the consequences of gangsterness. The main character, Michael Henchard, is such an inveterate gangster that he ends up ruined and lonely. Early on, the book launches right into the action, when Michael gets drunk on spiked oatmeal in some weird tent at a county fair, and then decides to sell his wife and baby, because he is sick of their nonsense. Some sailor enters the scene and purchases the wife and kid, and Michael passes out in the tent, waking up the next morning to the realization that he might have done something horrible, not because he sold his wife and kid like cattle, but because, by selling them, he might have besmirched his reputation. After deciding that everything is cool because he did not give any witnesses his name, Michael departs and eventually becomes the mayor of a town called Casterbridge.

I didn't know characters in Victorian novels could be so pimplike. Among other gangsterisms, Michael manages to win his wife back nineteen years later (the one that he sold), lie to everyone around him, and fight a Scottish man in a hayloft with one hand tied behind his back. Totally an entertaining character.

Another entertaining character is the hapless Abel Whittle, who works for Michael.  Abel is always late for work, because he always sleeps in. He can't seem to get to work on time. He even tries tying a string to his big toe and hanging it out the window for one of his coworkers to tug on while passing by his home during the morning commute. This works okay, but sometimes his coworker forgets to tug the string, leaving Abel over-sleeping soundly. Anyway, after multiple warnings about his lateness, Abel blows it again and fails to show up on time. So Michael goes to his house, jars him awake, and forces him to go to work with no pants on.

At the end of the story, Michael Henchard wanders off and dies alone in the woods, like a dog.

The book is totally good.
Posted by Will Garré at 5:22 PM No comments: