At that same club, we would sometimes get stuck playing golf with this weird kid, E-----, who would rub dirt on his face when he got frustrated/fatigued. "Oh man, E----- got a double-bogey, and now he's exfoliating his skin with a divot." That kid wasn't a talented golfer. He's probably good at other stuff. I, too, am not much of a golfer. I am much better at racquet sports.
Posted by Will Garré at 9:52 AM No comments:

I have been sitting at this cafe all day. I don't usually do that, but I secured a good spot near the outlet, and now I am dug in like an Alabama tick. Who loves references to the movie, Predator, as much as I do? Cool. Great film.

My friend and I were watching the guy who works at the Thai restaurant across the street sweep filthy sidewalk water into the sewer drain. He was wearing a bathrobe and open-toed lounge slippers, like Ray Liotta, at the end of Goodfellas, when he retrieves the newspaper in the front yard of his Witness Protection Program house. Not a good outfit choice for sanitation work. That guy is going to get some sort of foot fungus. It made it seem like he just sleeps in the restaurant, next to the Pad Thai machine.
Posted by Will Garré at 5:46 PM No comments: 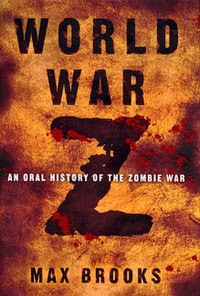 I am reading World War Z, by Max Brooks, son of Mel Brooks. I'm pretty sure I hate the book. Absolutely no character development whatsoever. Whenever I grow to like a certain character in the story, the perspective changes, and I have to get used to a new character. It's a little exhausting. Hopefully, by the time I finish this book, I will love it.

I brushed my dog, today. You could tell he felt conflicted about it. He mostly liked it, but it clearly made him somewhat uncomfortable.

Tonight I told my dog to "come" and "sit," and then, when he followed my commands, I explained that I just lost respect for him, because he shouldn't just do stuff because people tell him to. I'm trying to train him to be less of a patsy.

As I ate three and a half Belgian waffles tonight, I considered how I might be making a dining error, but I went ahead and completed my feast of doom. Now I feel like a baking soda volcano.
Posted by Will Garré at 12:56 AM No comments: