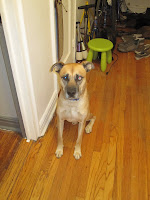 This training strategy has been working wonders.
Posted by Will Garré at 5:29 PM