My Cat Punched My Dog 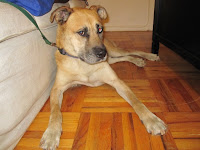 In case you were wondering, there are definite parallels between my bedroom and the deluxe suites available at the W Hotel. First of all, the AC feels incredibly refreshing after a long day of inner city travel. Also, there's a bed and some pillows and shit. What is more, there is a television with all the latest TV channels and HD quality. Moreover, there's a clock radio.

You might ask, "Hey Will, what's that large, furry beast walking around in your home getting punched in the face, repeatedly, by your jerk cat?" Well, my girlfriend and I have purchased a fully grown dog from the no-kill animal rescue shelter. I am so happy we bought this dog before he was not killed. He cost 200 whole dollars, but we could have paid for him with 400 half-dollars if we wanted to, and gotten away with it. That's pretty much what you'll pay, these days, to adopt a forlorn, wretched canine. When you walk into the kennel room, they look at you with the sad eyes. It's pretty heart rending.

We took this one beagle, Benny, for a walk, but he was disagreeable and hyperactive, so we rejected him. Then we walked this guy, Franklin, and he was cool, so we decided to take him for a sleepover party at our place. (They let you keep the dog overnight, to test him/her out). At first we were concerned the dog would clutch our cat in its jaws and shake the life force from his fluffy body, but that didn't happen at all. What happened was my cat punched the dog in the face as hard as he could while making primordial survival noises. My cat is well-sized and curmudgeonly, so we weren't surprised to see such a beat-down. My cat looks like a linebacker and often bites into the meat of my leg. My cat's a bit of a bully, and I think he owns a Bowflex.

So anyway, this dog has been cool so far. He makes cute faces 'n' stuff and has a curlicue tail. And he's nice and quiet. There is no chance he will one day have a violent flashback from his painful abandonment and turn on me while I'm letting him lick my face. That could never possibly happen.

Who wants a turkey sub? Probably my dog.

Franklin's only flaw is that he sometimes wants to murder other dogs. When you walk him, fifty percent of his interactions with other dogs will be positive, but the other fifty percent may lead to a grisly bloodbath. No biggie.
Posted by Will Garré at 8:13 PM