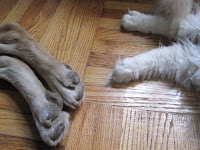 It's nice to watch my two pets sleep so close that they almost touch body parts. It warms my soul. It makes me wonder how many other types of animals can get along with each other. I suppose it is time for me to open my apartment's doors to a hyena. If my cat and dog can get along in the apartment, surely the next step is to introduce a hyena into the equation. A totally wild hyena. I want to own a pet hyena and release it in the dog park. "No, he's fine. He's a good boy, he just looks like he's engineered to kill. Relax."

My dog tends to be a little aggressive toward other dogs, so, at times, other dog owners act like I am walking around with a pet hyena. It's dumb. My dog's just a little rough around the edges, that's all. He's great with cats, though. I'll bet most of those "well-socialized" dogs I run into are horrible with cats. Next time another dog owner looks down upon my pugnacious shelter dog, I'm going to say, "Hey, pal. My dog may have just tried to murder your dog, but I'll have you know that he's more of a cat person than your dog could ever hope to be. You should have seen the other night when his paw almost touched my cat's paw. It was precious."

We can't really go to the popular, cleaner doggy beach in Prospect Park, because lots of other dogs are there, so we go to the beach on the other side--the one with the garbage and the sleeping hobos--and I watch my dog frolic amongst the pollution. He's cool with it.

Today I attempted to glue together my cat's broken food dish, and I ended up gluing it to the dining room table. Gorilla Glue is amazing.
Posted by Will Garré at 4:44 PM